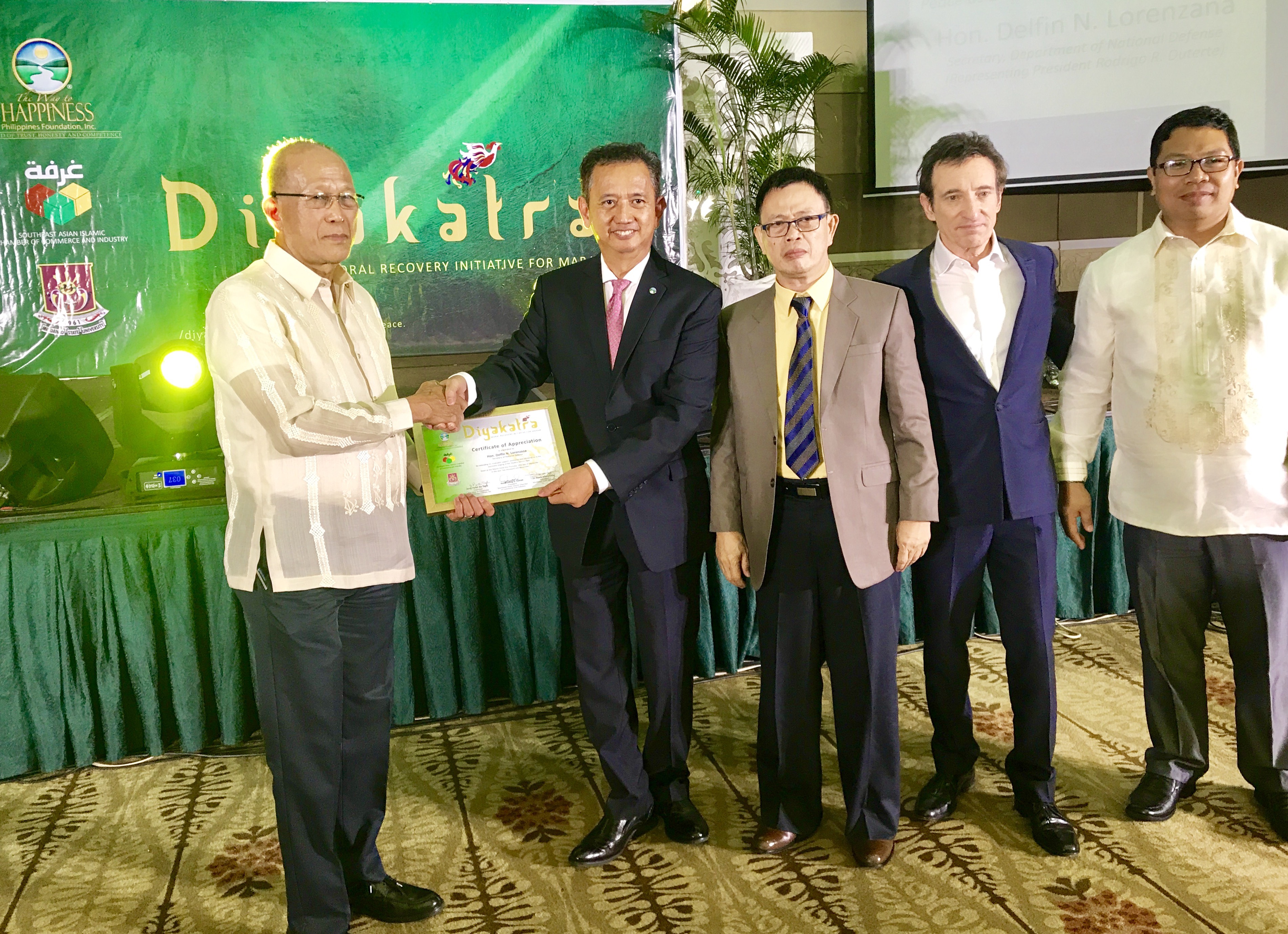 As the siege of Marawi ends, the momentum for change in our country is not only at a crossroad – it is at a Tipping Point. The rebuilding of Marawi presents a national turning point that goes beyond partisan politics.

Secretary Delfin N. Lorenzana, of the Department of National Defense, in a speech last Thursday, states that enduring peace and prosperity can only be sustained if it is happening in the hearts and minds of our people. A key message of hope from the Secretary: “LET US WORK TOGETHER IN ACHIEVING GENUINE AND SUSTAINABLE “DIYAKATRA”, THE MARANAO TERM FOR PEACE—ONE THAT IS GROUNDED ON ETHICS AND VALUES.”

The 3 Pillars of Philippine Development: Peace-Prosperity-Ethics/Values where expounded by speakers from government, business, religious and civil society at the Gala Donors Dinner in the Manila Hotel last September 28, 2017, “Diyakatra: Moral Recovery Initiative for Marawi,”

The event was organized by a multi-sectoral advocacy of The Way To Happiness (TWTH) Philippines Foundation, the Southeast Asian Islamic Chamber of Commerce and Industry (SAICCI), and the Mindanao State University (MSU) with support from the Philippine Amusement and Gaming Corporation (PAGCOR) and The Manila Hotel. The intent was to highlight the Marawi crisis in opening a national narrative and media focus on the role of ethics and values, as the key to creating sustainable peace and prosperity in the country.

Mr Barbie Atienza, from the Manila Bulletin and President of the United Print Media Group set the non-partisan and energetic tone of the evening; with the Opening Remarks of SAICCI President Amanoding Esmail that framed the economic and moral recovery requirements needed for Marawi.

The Ethics-Values Pillar of National Development was discussed together with the 2-Decade Philippine Journey presentation by TWTH Philippines Chairman, Jerry Perez de Tagle. A call was given for reactivating and renaming of the Commission on Happiness and Ethics-Values Formation (CHEF). This gives the Philippines the distinction as the 6th country in the world, and first in ASEAN, with a government focus on happiness-ethics for sustainable development.

David Pomeranz, TWTH Philippines Happiness Agent-Ambassador inspired the audience with his songs, and discussion of the non-religious, non-political, ethics movement and book, with the same title, The Way To Happiness. MSU Vice President Jamaloden Basar, representing President, Habib Macaayong, gave a spirited Closing, reaffirming our human dignity and the role of the university in educating the moral foundations of society.

“BEFORE I END, LET ME LEAVE THIS QUOTE FROM MALCOLM GLADWELL, AN AMERICAN WRITER: “IF YOU WANT TO BRING A FUNDAMENTAL CHANGE IN PEOPLE’S BELIEF AND BEHAVIOR, YOU NEED TO CREATE A COMMUNITY AROUND THEM, WHERE THOSE NEW BELIEFS CAN BE PRACTICED AND EXPRESSED AND NURTURED.” / AND THAT’S EXACTLY WHAT WE SHOULD DO—IN OUR DAY-TO-DAY LIVES, MAY WE EMBODY THE THREE PILLARS OF NATIONAL LEGACY—PEACE, PROSPERITY, AND ETHICS. / LET US START THIS, AND I AM SURE THAT THE REST OF FILIPINO COMMUNITY WILL FOLLOW SUIT.”